The M1 Garand and Commercial Ammunition

The CMP has recently updated their recommendation for ammunition used in their M1 Garand Surplus rifles.  Please see their notice at the link below.

Please note that the Ported gas plug for the M1 Garand ONLY deals with pressures in the gas cylinder and is not a device intended to lower the chamber pressures of the rifle.  Please follow any recommendations set forth by the CMP and verify the headspace on your rifle is also in spec.

The purpose of this article is to discuss the M1 Garand gas cycle and the effects of using commercial ammunition in the rifle. In this article, we’ll measure and discuss the gas cycle pressure for several different brands of ammunition. It is commonly stated that shooting commercial ammunition in the M1 Garand will cause damage to the operating rod. With the supply of M2 Ball ammunition dwindling, it seemed an appropriate time to investigate this topic and look for solutions.

Several manufacturers sell a venting type of gas screw that addresses the potential of high pressure in the gas cylinder. John Garand patented such a device for the M1 in 1945 (Patent #2369669). The venting gas screw works by bleeding gas out of the gas cylinder. I am going to present a different solution to the potential high-pressure problem, one that I believe is more elegant and simple in design and use.

At GarandGear.com we have designed a new ported gas screw for use in the M1 Garand. Unlike a venting gas screw, our product works by changing the initial conditions in the gas cylinder. The ported gas screw increases the starting volume in the gas cylinder, which results in lower peak pressures. No adjustments are required and no gas will vent from the device. The ported gas screw will produce lower peak pressures in all brands of ammunition that meet the SAAMI specifications for the 30-06 cartridge, regardless of bullet weight.

To evaluate the design of the ported gas screw, several sets of pressure data was acquired. The first data set measures the gas cycle when using standard M2 ball ammunition. This initial data set will define the accepted “safe” operating range for the M1 Garand gas cycle. The second data set surveys several brands of commercial ammunition. This data set was then compared against the M2 ball pressure set. Finally, the ported gas screw design was tested and its ability to lower peak pressures was verified.

The pressure pulse in the gas cylinder is very short, approximately four milliseconds. A high-speed pressure transducer was required for the test along with all the associated amplifiers, computers, and data acquisition systems. The transducer also needed to be able to survive in a high-temperature environment. A suitable pressure sensor was chosen and purchased for the test. Two custom gas screws were machined that would house the pressure transducer. The first gas screw would act like a standard GI gas screw; the second emulated the port in the ported gas screw.

The rifle used for the test was a 2.5M range Springfield Armory Garand purchased from the CMP. The rifle had a new criterion barrel installed. All of the gas cylinder and operating rod components were inspected, measured, and verified to be in spec. The barrel gas port was inspected and verified to also be in spec. A new USGI spec operating rod spring was installed and the rifle was properly lubricated. Figure 1 shows the sensor installed in the rifle.

Stage 1: This stage is defined as the bullet has moved forward of the gas port, but is still in the barrel. This stage is responsible for the highest rate of change of pressure over time (dp/dt). However, it is also the shortest of the stages, lasting approximately 46 microseconds.

Stage 3: Pressure equalization has occurred in this stage. It marks the point of peak pressure in the gas cylinder. From this point forward, gas will be flowing from the gas cylinder back into the barrel. Gas is also flowing past the piston and exiting the gas cylinder as previously mentioned. 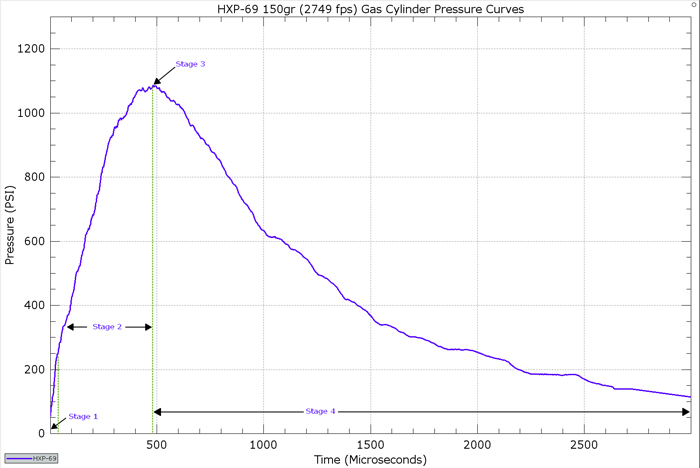 The Effect of Port Pressure and Bullet Velocity on Peak Pressures

We chose M2 Ball to be our benchmark for what a safe gas cycle should look like. This is reasonable since the M1 Garand in its current configuration is designed to use M2 ball ammunition. The ported gas screw will prevent pressures from exceeding this baseline when shooting other types of ammunition.

Our initial pressure testing showed that the pressure curve varied significantly between different years of production and manufacturers. To be safe, we choose the lowest peak pressure measured as the value that the ported gas screw should never exceed when using commercial ammunition. Figure 3 below shows one pressure curve and the peak pressures measured from several different years of M2 ball ammunition. For historic reasons we also tested M1 ball ammunition and included the results in the graph. The Army technical manual [TM 43-0001-27] describes M2 ball ammunition as being loaded with 50gr of IMR4895. For reference, this load is also included in the figure. 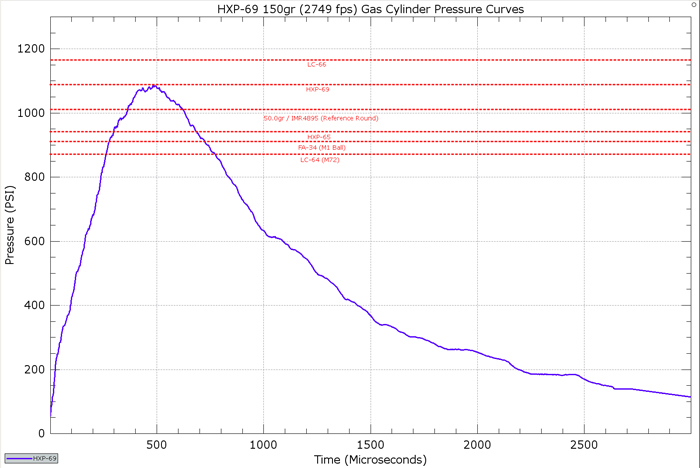 How the Ported Gas Screw Works

When a cartridge is fired, it has a limited amount of gas that can be transferred to the gas cylinder before the pressure decays. If we increase the volume of the gas cylinder – by means of the port, the resulting peak pressure must decrease. Peak pressure is the component that can cause damage to the operating rod. Total impulse is the component that determines if the rifle cycles correctly. In simple terms, the total impulse is the area under the pressure curve times a constant.

Reducing the peak pressure lowers the acceleration of the operating rod, and helps reduce the wear and tear on sliding parts and bearing surfaces.

Several of the most common brands of ammunition were purchased for testing. Each of the following graphs will list the brand tested, and show two pressure curves. The first curve is the pressure generated when the ammunition was fired using a standard GI gas cylinder screw. The second graph will show the pressure curve when the GarandGear ported gas screw was installed. Two M2 ball reference lines are included for comparison purposes in each graph. The velocities listed in the graphs are actual velocities measured using a chronograph.

It is important to mention that the commercial ammunition tested is for a specific lot number. The manufacturers can change the load at any time and without warning. Some of the loads tested do not produce excessive peak pressures. This can change without notice if the manufacture reformulates their ammunition.

The following charts summarize the peak pressures measured during this experiment. It also shows how effective the ported gas plug is at reducing peak pressures. In the graphs below the two green bars are two different years of M2 Ball ammunition.

To understand the graphs, let us examine the following example below.  The graph below shows the total impulse measured for a standard M2 Ball cartridge.  The total impulse for various years and makes of M2 Ball ammunition falls between 274 and 305 lbf-ms.  Total impulse values larger than this will result in faster bolt speeds (as compared to M2 Ball) and values less than this will result in slower bolt speeds.  A rifle begins to short stroke with a value of approximately 190 lbf-ms. This assumes that everything is in spec and the rifle is properly lubricated.

When possible choose ammunition that doesn’t exceed M2 ball in both peak pressures and total impulse.

Using a venting or ported gas screw is a good way to utilize commercial ammunition and protect your op-rod in your M1 Garand. From the graphs and data above, it was verified that the ported gas plug limited peak pressures in all cases to levels below that of M2 Ball. The ported plug also reduced the total impulse on all of the rounds tested. The ported gas plug has the added benefit of requiring no adjustments when switching ammunition.

Keep in mind that heavier bullets also increase recoil on the rifle which can increase the wear and tear on bedding surfaces of the stock and also contribute to stresses on the receiver. The CMP has also recently updated its guidance on ammunition use. Please see their recommendations at the link at the top of the page.