M1 Garand and your Thumb

M1 Thumb has been the center of rifle lore for many decades. For many it instills fear, others dread and for some just sore thumbs. The saying goes that there are two types of M1 Garand shooters. Those that have received their M1 thumb and those that are going to.

It doesn’t have to be this way. The root cause of M1 thumb can be traced down to user error. A mechanical failure could happen but 99% of the cases are self-inflicted.

For those that have heard of M1 thumb but are unsure what exactly it is, the following description should shed some light on the process. M1 thumb is what the shooter ends up with when the bolt closes at high speed and smashes your thumb into the receiver. The high bolt speed makes this event equivalent to smashing your thumb with a hammer. It’s one of those events that you won’t forget.

1The two responsible parties in the case of the M1 Thumb are the Bolt and the follower. When the shooter grabs the op-rod handle and pulls it back smartly, the op-rod engages the op-rod catch and locks it in place. However, if the shooter does not fully retract the bolt, the op-rod catch never engages the op-rod and the bolt can get stuck on the follower. When this happens, ONLY the friction between the two parts prevents the bolt from flying home. If you bump the rifle or stick your hand in the receiver, the bolt will snap shut. If this happens, you’ll be telling your friends how you just joined the club.

The image below shows how the bolt can get hung up on the follower. When the bottom of the bolt is properly greased it’s very difficult to get the bolt to hang up as shown. 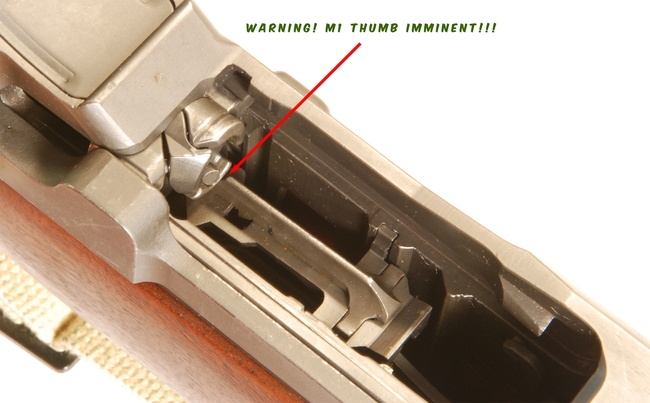 2When you pick up an M1 Garand the first thing you should do is firmly retract the bolt and verify it’s locked in place as shown below.  With the op-rod locked back, you can depress the follower almost all the way down before the bolt releases. However, if you pull back on the op-rod, even slightly, and then depress the follower, the bolt will immediately snap shut.

With the bolt correctly locked back, you can safely clean and access the internal component without fear of the bolt closing on your hand. Just remember to never pull back on the op-rod when touching the follower unless you wish to close the bolt.  If you’re holding the operating rod handle you can safely ease the bolt shut. 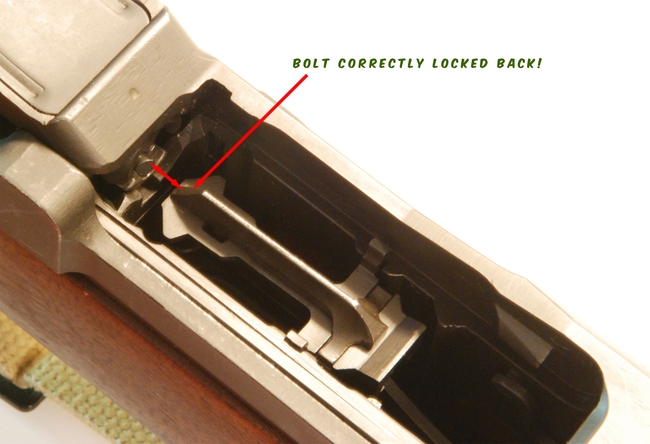 3When loading a clip into the M1, it’s very difficult to get your hand caught. In the photo below you can see an enbloc clip about to be inserted into the receiver. When the shooter depresses the clip into the receiver the follower is depressed, the clip locks into place, and the bolt is released. With the shooter pressing down on the top round in the clip the bolt will not be able to fly home until that downward pressure is released. The top round occupies the space where your thumb would have to be, to get caught; making it almost impossible to pinch your hand when loading a clip. 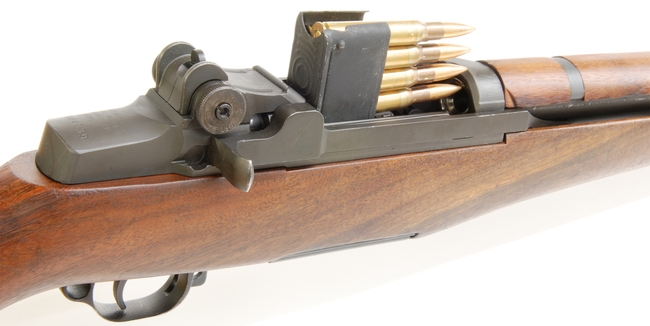 Now that you understand how one can get an M1 thumb, you’re in a position to never join the club.  Practice loading clips using dummy rounds and gain confidence in the process. Within a very short period of time, the process will become second nature and the risk of accidentally smashing your thumb will have passed.